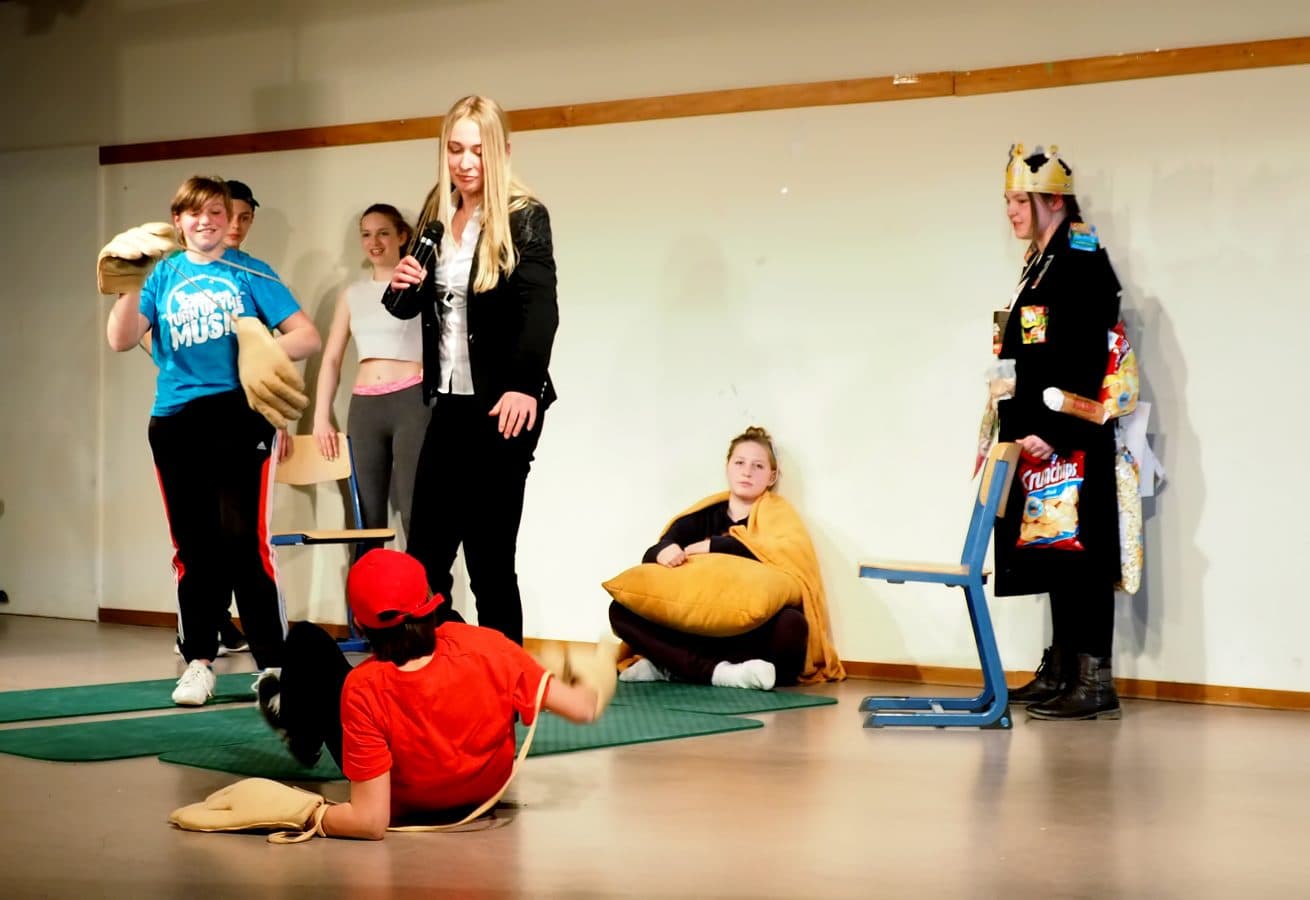 Way to the theatre

Since January 2017 Anne Tysiak and Peter Pruchniewitz, two speakers of the theatre “The Stelzer”, together with the young people from Mittelschule Landsberg, have attended four shows of theater plays in Augsburg, Memmingen and Munich and also cast a glance behind the scenes.

Theater in its different facets

In addition to the joint theater visits, the project participants also took part in guided tours behind the scenes. During the holidays and weekends, workshops were held for theatrical playing, writing and dramatizing, in order to get into the subject itself practically. In this way, the young people have become acquainted with theaters from very different perspectives – in order to develop ideas for their own scenes.

On Saturday, April 26th, they showed in a workshop in the well-attended Aula of the Landsberger Schlossbergschule, which has come out.

The Werkschau is a “public rehearsal” and not a finished play, Peter Pruchniewitz pointed out in the opening speech, which he shared with Anne Tysiak.

His thanks went to the federal program “Ways to the Theater” of the ASSITEJ Germany within the framework of the Federal Culture program. The “Die Stelzer” theatre and the Mittelschule Landsberg, especially their dedicated headmaster Christian Karlstetter.

The young actors and actresses were very pleased that so many spectators came and showed their play. Even though it was still called “I would like to rehearse for two more weeks” before the start, it was played convincingly and intensively on the stage.

When there was a copywriter on the stage, one noticed immediately, as some parents had protested with their children, because there was suddenly the keyword as a small help for the first stage performance of their lives.

In the scenes, the young people have implemented various techniques and formats: dream scenes, video recordings, sound recordings of surveys, and classical drama work with dialogues. The question was: To what would I fight? To topical issues that concern everyone.

Whether family conflicts, bullying, seemingly absurd career desires, beauty ideals versus overweight – in funny and original ways represented by food consultants and personal trainers on the one hand, and the food industry and laziness on the other – nothing was left out. In addition, an audio reportage on the subject of “bullying”, combined with footage on a screen as well as “looking away” actors on the stage, was a reflection.

As a final conclusion, all the performers have shown at the end a kind of Bollywood dance-show, in which it became comprehensible for all, how well they have teamed up in and with the work together.
Voices from the audience

Afterwards, as in the theater, there was a small “premiere”.
This was a great opportunity to capture the audience’s impressions:

“I thought it was very good, and I am still quite flattered,” said Barbara from Landsberg. “The piece was a round thing, the theme beautiful, and I found it fascinating that it was all worked out.”

Eva vom Ammersee was also enthusiastic: “It was very versatile, everyone could contribute. The motivation of the young people I found incredibly great – so long to hold out and so to bring in!”

“It was super beautiful, the topics were up-to-date and interesting, and the young people have implemented the topic super,” says Birgit from Bürgen. “It was noticed that they were with a lot of fun and joy.”

And it really was a lot of fun for the students. “I liked the project very much,” says 15-year-old Moritz. “I’ve never played before and it was great to work out and play all these different scenes.”

The 17-year-old Sarah also liked the project. “It was a nice community work and very funny.” Katharina, who also helped behind the stage and could only be seen for a short time on the stage, enjoyed it very much. “Just backing up and helping was nice, it was real Teamwork!”

Ways to the theatre – Does the future look like this?

The piece “Between things we are safe”, we have on Saturday, January 14, In the Landestheater Schwaben in Memmingen.

It plays in a very own world, disturbing, strange, but not impossible – unfortunately? Or not? Or other?

We work on statues of «visions of the future» and try out our «visions» and discover, it is also different, but not by itself.

Wege ins Theater: “For you my love” 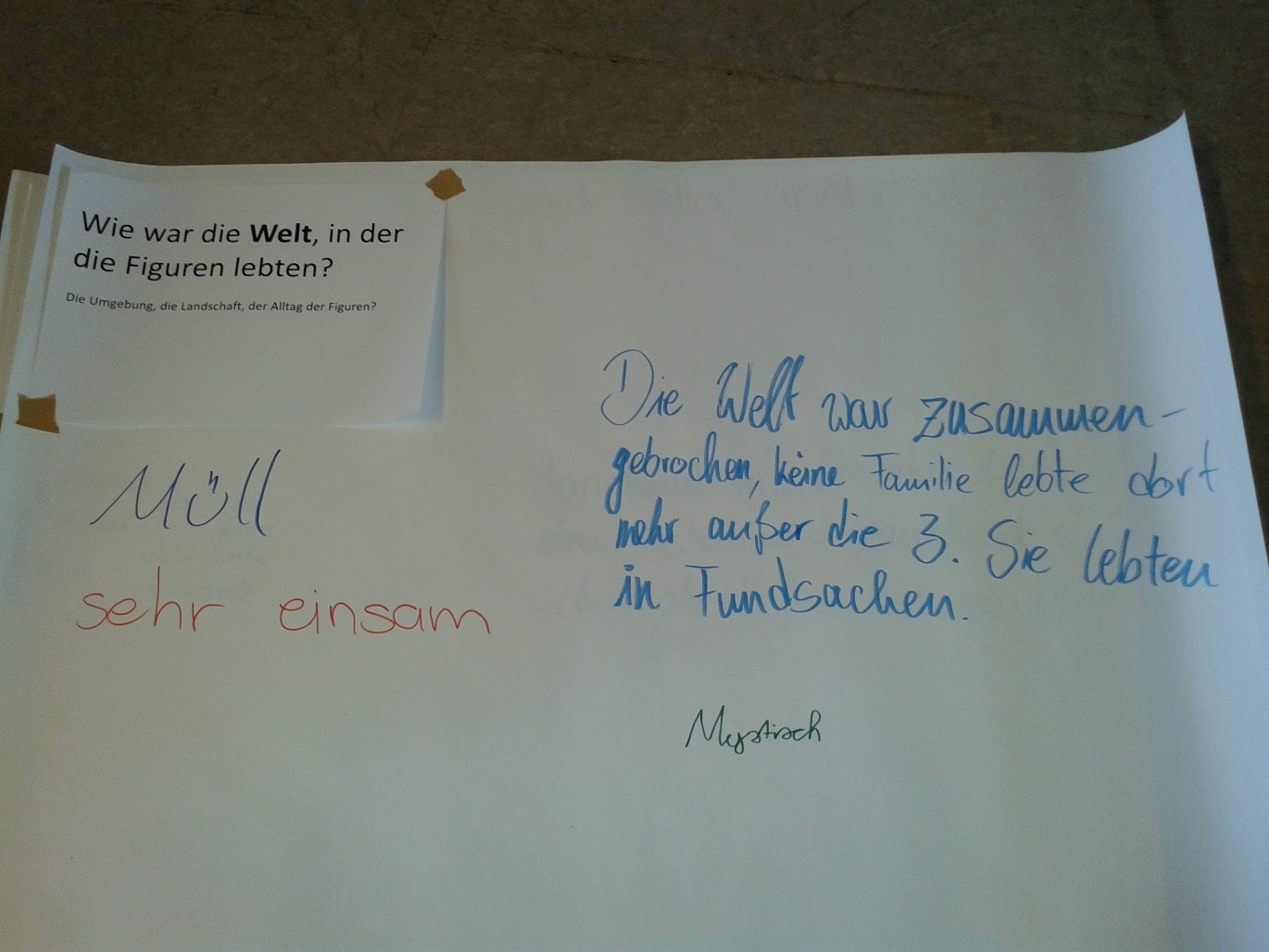